What is the impact of the financial crisis on African economies?

Hope Not Lost in Zimbabwe 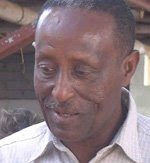 Vote for Africa’s own Yohaness Gebregeorgis as CNN hero of the year.

This story has not filtered much into the local media in Colorado but I take this opportunity to bring it up.

After reading about Yohannes Gebregeorgi’s story many times, I am now compelled to do something about it. If you have heard all the commercials on TV about preparations for the CNN Hero of the year, take it a step further and go to the CNN website and cast your vote for this son of Africa.

Why would I cast my vote for him?

First, this man has educated and continues to educate thousands of children in Ethiopia on how to read and write. He has done so by starting the Shola Children’s Library. He has started other school projects where Ethiopian kids enroll into school and receive the education that they otherwise would not get if left in the hands of the government.

How many of us would do this for children that are not our own?

Second, this story exemplifies what Africans in the Diaspora should be doing to help build a better Africa. While we are away from our beloved continent, whatever education and material wealth we gain should be channeled back to
Africa to make it better. The saying that “when you teach a man how to fish, you teach him to fish for the rest of his life” fits perfectly into this story.

What Gebregoergis has done is to teach the children of Ethiopia how to read so they can become productive Ethiopian citizens for the rest of their life.

Lastly, this story has a Colorado connection. Ethiopia Reads, the organization that Gebregoergis founded and which has helped implement the idea about books and a library for children in Ethiopia, has local operations on 50 Steel Street in Denver. It is here that the US operations for Ethiopia Reads are run.

Earlier this year, Gebregoergis was nominated as a top ten CNN Hero of the year by a panel that includes people such as former Archbishop Desmond Tutu and Deepak Chopra.

On Thanksgiving Day, CNN will air an All Star Tribute featuring the nominees for this year.