Coverage of Ebola in West Africa Monica LaBiche-Brown, executive director of Africa Development Promise, sat down for an interview with Africa Agenda to discuss the organization’s plans for building pathways to economic independence in Africa.

These cooperatives or co-ops are especially important in areas of rural Africa where small farmers may not have the monetary funds available to grow and sustain themselves. Co-ops allow a group of people to pool their resources together for a common goal to gain better market power.

Africa Development Promise is currently working in Rwanda. The organization has plans to expand into Uganda as part of its phase-two development.

According to Africa Development Promise, the organization works with farmers in three ways.

First, to help farmers understand what is a cooperative, what are the responsibilities of the board and group, and to develop the business aspect. The second is on the agricultural side, helping to find and access good seeds and pesticides for maximum harvest. Finally, the organization helps farmers build strong networks.

Partnerships help to bridge obstacles found in their value chain and maintain sustainability, she says. Africa Development Promise has a long-term vision to eventually enable the groups to run themselves and become more of a monitoring organization, with additional services being provided as needed.

Having seen the changes that cooperatives have on the lives of the farmers, LaBiche-Brown is confident that Africa Development Promise will play a positive role in helping Africa move forward in economic advancement.

When speaking about her passion, she says of Africa Development Promise, “ the word promise meant a lot because we wanted to make sure that when I wake up in the morning I remember that I have a promise I have made to some other people who are dependent on the work we do.”

Labiche-Brown started the organization in 2013 after recognizing that support was needed in the agricultural sector of rural areas in Africa. In this video interview, she tells us that one motivation for starting the organization is the idea that small-scale farmers in Africa need resources to help build cooperatives in their respective communities.
[embedyt]AOLugAR2mnA[/embedyt]

Africa Development Promise recently obtained its 501(c)(3) designation from the U.S. Internal Revenue Service. More information about the organization can be found online at www.AfricaDevelopmentPromise.org. 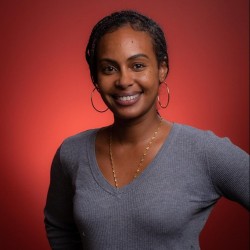